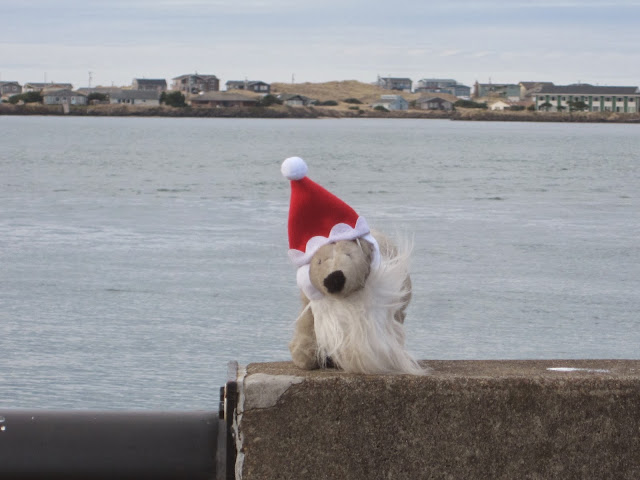 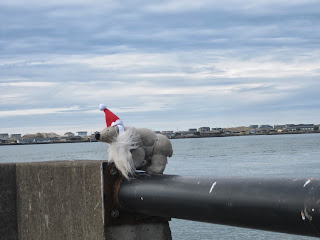 So, the local group that I ride with posted up a New Years day ride.. However, there was also an offroad group doing the same thing and couldn't commit myself to either one until New Years morning.
The weather at the house was complete crap.  Dense fog and cold, but I had a good feeling it was going to be nice over at the coast, and I really needed a Vitamin D fix.  So, asphalt it was going to be.
Now I had read earlier that they were departing about noonish... Apparently I misread when the departure time was, and thought I would be there a half hour early, but missed them departing by over 15 minutes.  Off to the races it was.. I had a general idea of the route they were taking, and if not ohhhhh... well..... I was riding.. Out through the city and right on Reservoir.. whack the throttle open and let it rip... Mind my manners through the sleepy little town.. Left on Hwy34,  My right hand rotated the grip fully.  The Tiger let out a mighty growl.  The shifter went bang, bang, bang, bang, bang.  Top gear ripping down the straight.. Eyes scanning the horizon for other predators ( of the four wheeled and flash light kind)  Downshift to third, swivel the head, lever the knee, look up the hill to the next left, right left complex.  Ohh... we were having a grand time of it, ( I think she has been feeling a bit neglected as of late,  even with our Saturday jaunt to coffee). After many more left, right, left, complexes; the road settles down a bit and the throttle jams open once again.  Soon, I see a large group of riders on the side of the road taking a break.. I know these guys.... I didn't think I would have caught up to them so quickly though.

They began to depart and I jumped in line and it was a slow game of follow the leader.  Granted, they were doing what they should have been doing, but I had just had a lot of fun by myself trying to catch up to them.  I settled in behind a red Kawasaki Vulcan, with a rider who was unable to maintain corner speed.. I nearly ran over the rider three times.  AAARRRGGGHH.. is one the phases that was uttered in my helmet.  Thank goodness I don't have a Sena Smh10 with the always on mic., somebody would have heard phases that not even the worst sailors use.  We made it all the way to the beach and nobody died.. The group was headed south and some headed back the same route.  I being me, decided that I had done enough group riding for the day.  I decided to go north

So we travel across the bridge and this road catches my eye.. Hmmm, where does this go. So, I take off on the fabulous little road called Bayview Drive. It is a wonderfully curvy road that turns ties into another curvy road, Beaver Creek.  I had already been on Beaver Creek, so I stayed on Bayview.  After a while it is no longer paved.. No problem, this is a Tiger after all, and I ain't scared of no dirt... It wanders up and down and around the hills, and get start to form an idea..  I think I might be able to get to Elk City from here without catching Hwy 101﻿.
﻿
From there I could run out through Nashville and over to Blodgett.  Now, in typical Polar bear fashion, this being started after 13:00 and it gets dark at 16:45, and we have no map, no cell service, no GPS, limited signage,(they mostly get used for target practice), and just over half a tank of fuel..


Skip forward to 15:00.. many miles of dirt road, long vistas, fading light and an impending sense that we are not going to be home before 16:30.  I end up on this logging mainline and am following the mileage markers.. Of course, every now and then they disappear for a couple of miles and start hoping that your on the right road.  I came across a herd of elk standing on the road in front of me.. A couple of growls from the Tiger had them moving again in another direction. 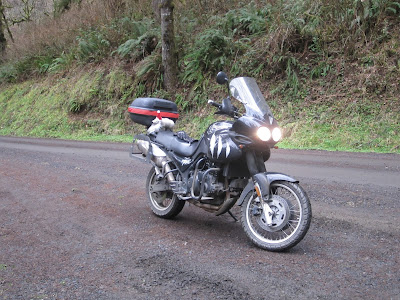 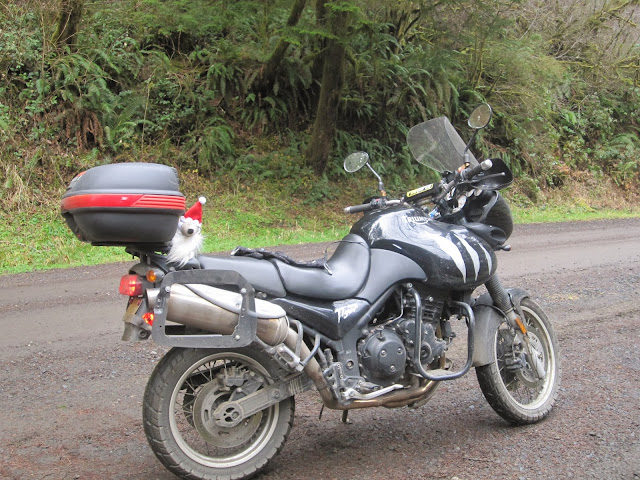 I had a State Trooper pass me going the opposite direction just before this, so I thought I was headed the right way.﻿﻿
﻿
﻿
﻿
﻿
﻿
With one eye on the road and one towards the fleeting light, I scrap the Elk city plan and just need to get to a highway.  It is now 15:35. Making my way off the ridgeline and down the hills I see this couple walking.  Casually dressed and like in their early 50's, they flag me down.  "Our car broke down a few miles back. Can you give me us a lift down to the fish hatchery?"  It is getting dark and cold in this little valley, and I am still not entirely sure where I am.   Sure, Why not.    The husband  climbs on and we start going down the mountain.. Turns out, it is another 6 miles to the fish hatchery. He climbs off and starts heading up to a house to call a wrecker.  " Would you like me to go get your wife?" I ask. "I know it is a rough road, but if you wouldn't mind.", he replied.  So I whip the Tiger around and go flying up the road back to her.  She climbs on and we bound on down to the hatchery.. I didn't see the husband,  " I let him off right here."  She climbed off and headed up to knock on the door.  Yeah, chalk one up for good karma.. What are the odds that with all of the crazy roads I could have chosen, ( If you ever look at an Oregon map and see all the little gray or red unmarked squiggly lines,  yeah, those are the roads I was on.)  I would find my way to them at just the right time.  A sense of satisfaction and amazement came over me.
I proceeded to drop the hammer and race the light.. I needed to clear the Alsea  twisties  before the darkness set in with the fog.   Raced to Alsea.. Texted my location and new estimated arrival time, and headed for home in the cold and the dense fog.  A sense of relief filled me as I exited the last corner and headed down the long straight, making it through there before the darkness set in as well.. Back through the sleepy little town.  The low fuel light just came on.  Back through the city.  It is now very, very, dark, and very, very foggy,  and very cold.  Vision is very limited.  It almost becomes surreal.. Just a little bubble of light in darkness.  The solid lines on the road look the same and I lose track of my sense of speed.  I can't tell how fast I am travelling until I am almost upon the dim tail lights of  the car just in front of me.."(*)&*(", where the hell did he come from and why the hell are they going so slow....I was totally unaware of my closing speed.. Alright, dial it down... cross the interstate.. cross the open fields.  Searching for the light indicting my turn.. Ahhh   Home... Pull the Tiger into the carport.. Stretch out the arms and legs.. Take a nice hot shower..
And thus ends another Adventure with Bud E.
This is most likely the route that we took.. best that I can recall and the mileage is pretty close.